More on the End of the Trail

10 by 10
Mon 8/6  - Tying in my Steps & Completing the Pacific Crest Trail
For 25 years or so I've talked about hiking the PCT.  Starting in 2000, Harold and I began hiking Washington and northern Oregon PCT in sections.  In 2016 I completed the last 35 miles of Washington.  Last year I hiked 1700 miles of the PCT from the Mexican border to Ashland, OR.  Fires and closed trail ended my hike some 300 miles short of  McKenzie Pass.

"Maybe, just maybe today will be the day," I'm thinking.  It would take a big day but I was hopeful.

A few miles into the day I could see Rock Mesa (a lava field).  The map indicated that I needed to cross several lava fields.  The map was spot on.  Lava fields are nothing but a pile of rock.  With each step the lava rock moved, shifted, rolled.  Each step took concentration and a prediction of what would happen to the rocks when I stepped on them.  I had to be deliberate and use my hiking poles to maintain balance.

I had some great views of two of the Three Sisters (volcanic mtns.)

In the afternoon I came to Sister Spring.  You could see where the water bubbled up and watch small gravels move.  The water was wonderful.  Three other hikers were there and had no problem sharing the water.  I told them what was in store for me at McKenzie Pass.  A young woman looked up from her phone, "That's only 10 miles from here.  You'll make it today."

A few miles later I entered the restricted Obsidian Area.  A special permit was required to camp there.  In the next two miles I saw more obsidian rock than I thought possible.  This would have been a sacred area for the Native Americans.  I imagined obsidian rock from Oregon making its way across the continent one trade at a time.

The McKenzie Pass area is a lave field and there is no water.  So, 1 1/2 miles from McKenzie Pass, I turned onto Lava Camp Lake Trail and headed for the lake.  Tonight was to be another "dry camp" and I needed more water to get me through the night and for next morning's hike.

Back on the PCT I entered my last lava field of the day.  One thing about it, the PCT doesn't believe in "easy".  The last mile and a half was a gnarly, jumbled mess of lava rock.  Finally, I hit the pavement.  I walked across the road and found where the trail continued northbound.  Hiking on lava can be much like walking on marbles.

About 300 yards up the pavement and I made it to McKenzie Pass.  It was just before 5 pm.  The hikers I met at Sisters Spring asked, "how does it feel?  You just finished the PCT."

Fours years ago I had a complete rupture of the quadriceps tendon in my left leg.  The surgeon said hiking the PCT would be "iffy".  Well, "iffy" and I did 2000 miles the last two years.  My hike of the PCT was now complete and I was very satisfied.

The other hikers had told Tony about me.  When he came down from the observatory, Tony asked, "where's the guy who just finished the PCT?"  The hikers points to your truly.  Tony said follow me.   There was a Tecate Beer, chips, blueberries and gorp.  Any beverage you do not have to carry, treat or filter is wonderful.

I could have gone to Bend with Tony right then but I wanted to spend the night at McKenzie Pass.  I also had a decision to make.  Continue hiking northbound or  get off the trail.

After Tony takes the other hikers to Bend, I am filtering water behind the toilet (the only shade at McKenzie Pass).  A guy comes up and talks.  He get real excited about what I've done and says he'll cook a hamburger for me.  His name is Gup, a mountain biker.  When I get to where burgers are cooking, Gup has a third guy with him named Sam.  We're talking when out of the blue, Sam asks me, "How certain are you about going to heaven?"

I said, "100% certain. Do you want to know what I believe?"  They said, "yes," so I recited the Apostles Creed.  I think they were flabbergasted.  I told them about hiking for the kids at Camp Korey.  Sam gave me $40 for the Camp.  Now, I was flabbergasted.

WHAT A WONDERFUL DAY!!  I completed the last steps of the PCT.  There was free food and drink.  I was asked what I believe and I was given money for Camp Korey. 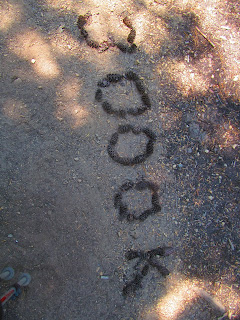 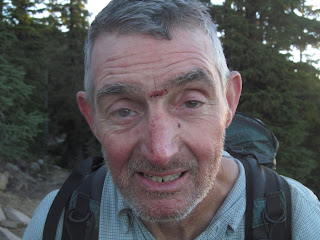 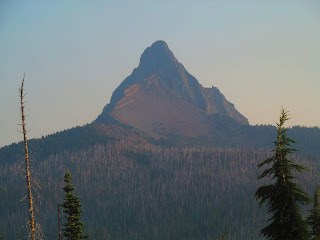 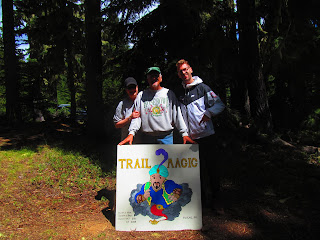 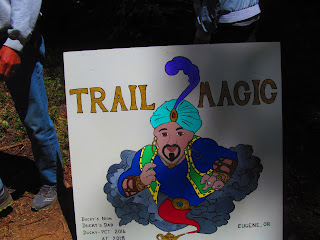 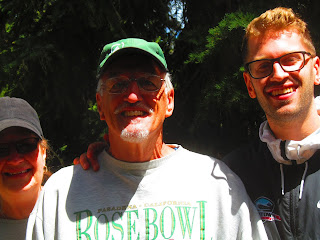 Kevin called from Big Lake Youth Camp, and while it wasn't a through hike, he has completed all the steps on the PCT.  Without further ado, here are the annals of Kevin's hike.

The last couple of weeks were a blur