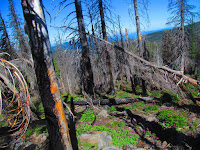 I left camp at 5:00 am.  Yesterday and today I hiked through the 2017 wildfire.  In places there is hardly any live vegetation.  The fire must have been high intensity, high severity, or in Texas lingo--One hot hummer. 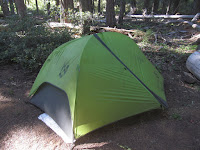 I made it to Mazama by 9:20 am.  Shower, resupply box, charge phone and back to the trail.  I forgot to ask about out-going mail.  I hiked to Dutton Creek Camp, then up Dutton Creek Trail to Rim Village.  No campground here.  Last year I talked to a hiker at Rim Village and I thought she said came from a campground.  I have done 18 miles so far today.  I will have to do more to find a place for an inconspicuous bivvy. 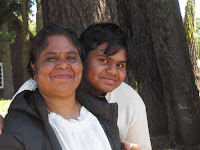 The most amazing thing happened.  I am hanging out in the shade near the public restrooms and talked to several people.  After I cooked my hot meal, an Indian woman wanted to talk.  She was very much intrigued by what I am doing.  She asked, "Your wife is ok with all this?"  I told her about the resupply boxes and how the blog worked.  She said, "Your wife is most wonderful!"  You can say that again.  At some point I told her I wanted to take Becky to an Indian Restaurant in Yakima.  She replied, "Indian Restaurants are crap. You come to my house and I feed you and your wife. The real deal."  She was serious and took my name and phone number and gave me hers.

She gave me her name (very difficult).  Her son her initials are JC.  I can do that.  This was not a coincidence.  Once again God has blessed me beyond belief.  I am completely blown away.  From a different continent, from a different culture, from a different language, but somehow we made a connection

At Rim Village I had 18 miles. I moved on another four miles mostly by road as I have done the lower Rim Trail.  I quit at another overlook of Crater Lake.  Pretty soon I was talking with Bill and Wendy from Houston, TX.  The card he gave me has a photo of his plane.  Sweet looking plane. 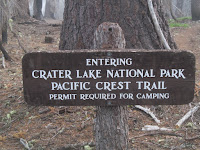 Later yet, I met Greg and Andrea (different last name).  Andrea wants to do the PCT and had lots of questions.  Greg gave me his number, he said to call if I needed anything.  Exchanged contact info with Andrea. 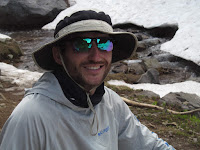 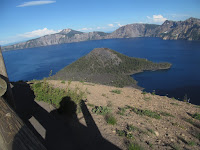 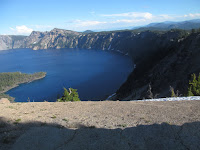 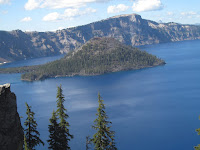 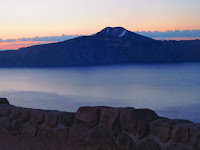 A year ago, it was so smokey, I could hardly see Crater Lake.  I would like to bring Becky.  Pretty Stunning.

I have been playing leap-frog with a hiker named Tim, much younger than I am, like most of the hikers.  Tim is just doing Oregon on the PCT.

I spent the night in an outhouse.  The wind was howling and I was petrified of something blowing into Crater Lake.  Hard to sleep because of the wind.

July 15. Started hiking before 5:00 am.  More snow patches but going fine.  On a big snow patch, I lost the PCT.  Still dark.  Set my hiking poles as a reference bearing.  I finally used the phone app Halfmile to find the PCT.  The trail switched directions under the snow.  I passed the high point of PCT for Washington and Oregon, then I lost trail again on snow.  Once again, the trail switched directions underneath the snow.

At Windigo Pass, a hiker showed up.  Not your average hiker--VERY grungy, yellow shirt similar to the one Garrett had.  His trail name was Thirteen.  He did the Appalachian Trail last year in 13 weeks.  He is currently doing 40+ mile days.