Two Canadian Women
On Monday I came upon two women from Canada:  Happy Feet (trail name), age 61, from just outside Manning Provential Park; and Gravity, much younger (30 perhaps) from Victoria, BC. 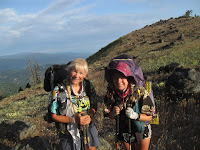 This morning I left camp at 4:37 am.  About 6:30, I came upon the camp of Happy Feet of Gravity.  We hiked together about five miles.  Happy Feet has a strained or torn ligaments in one ankle.  One Tough Gal! 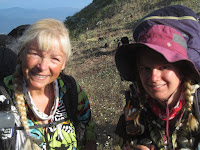 It's looking like I'll be ahead of them now (they are doing smaller mileages in part due to the ankle).  I offered to Trail Angel for them in Washington.

Between Callahans were two coolers with pop. I had one each direction.  I also had a Sprite at the truck stop in Ellensburg.  In short order, I have had my yearly quota of pop.

When I was cooking and dehydrating dinners, I found spaghetti sauce and Alfredo sauce in the pantry.  I added the Alfredo sauce to some cooked hamburger meat and dried it.  I added dehydrated veggies and whole wheat elbow macaroni.  The Alfredo was ok, but not as flavorful as I was hoping.  After hiking 21 miles, I ate the whole dinner.

Last night I had red chile stew with Spanish rice and dehydrated refried beans.  Oh my! Better than any Mexican restaurant I've eaten in both Washington and Oregon.  And by a long shot.

Maybe it's how tired I am physically, but I am having extremely intense dreams.  A dream wakes me up and then I have a hard time going back to sleep.

A light drizzle started around 2:00 pm.  By 3:00 pm I was pooped. No campsite behind or ahead of me, so my tent was pitched in the middle of the gravel road.

About six miles ahead, I have a 2000 foot vertical climb, then easier going the rest of the way to Fish Lake. 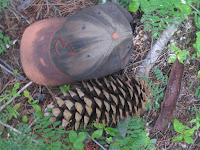 On the trail at 5:26 am (I slept in a little).  I handled the uphill much better for today.  The high point is elevation 6162 feet.  At mile 1755.2 is a wonderful spring.  The sign said, "This spring has not been tested for drinking safety."  I've worked on a lot of spring developments.  Unless the spring box has fallen in, there is no way the water could be contaminated.  Spring is flowing at least five gallons/minute.  It took five seconds perhaps to fill a quart bottle capturing only a portion of the flow, so I am not treating or filtering the water.

Due to a combination of I felt better and the trail was mostly easy, I had twenty-two miles in by 3:00 pm.  Plenty of time to do 25 or 30 miles.  I was thinking two more miles today, but it will be on the side of a hill with no campsites.  (This turned out to be correct.)

I saw two deer and a blue or ruffled grouse today. 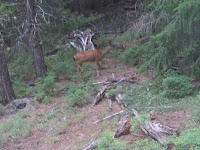 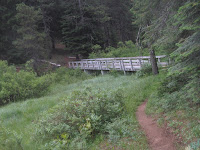 Earlier in this blog I wrote about my son giving me three goals: 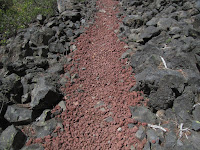 Days 1-3--no uphill gear and I was SLOW.  And so I tended to hike with no water to drink nor food to eat.  Tuesday, July 9 and especially, July 10, my pace has been faster.  So I eat and drink more frequently.  In part maybe because I feel better, but the trail is flat for big stretches.

Today I hiked about a mile through a lava field.  There will be MILES of lava fields to come.  Black rocks are basalt.  Red are cinder cones.

This afternoon I caught up with a hiker named Brian.  I'm guessing he's in his mid-thirties.  He started on Saturday, same day as I did.  He didn't hike to California border though.  Recently the company he worked for folded.  So he came out west to hike the PCT.  About an Hour after I set up camp, Brian showed up looking very bushed. I went over to his camp to suggest that we have dinner together and share stories.  Brian was already in bed.  Time: 5:15 pm.  At 6:40 pm, Brian popped out of his tent.  Turns out he's from New Jersey, but has lived in California and other places for work. 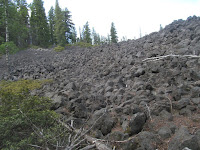 Thur 7/11  Left camp at 4:38 am.  The hike to Fish Lake Trail (5.3 miles) was mostly lava/basalt rock.  Made it to Fish Lake at 7:10 am.  Not a soul at the resort.  I'm waiting to get my resupply box, shower, and maybe do laundry.  While I waited, I had breakfast and filled up with water.  I did get my resupply box (thanks, Becky), had a shower, and washed out my shirt and socks.

I'm sitting on the deck just above the lake.  I just talked with Becky.  It was good hearing her voice. 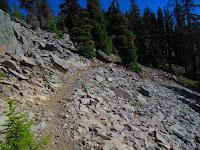 Next stop for this caravan is Mazama Village in Crater Lake National Park.

Fri 7/12 Yesterday it was basalt or lava fields.  Today it was slate rocks, since I hiked Slate Peak.

Yesterday I came onto a hiker in a head net.  I thought the mosquito population was supposed to be quite low.  But by evening the mosquitoes were much worse.  This morning I rushed breaking camp.  I hoped I could walk away from the problem.  I couldn't and an hour later, I stopped to take drastic measures.  The rascals were veracious and persistent especially with the back of my neck and into my hair.  I finally hit my high bar.  I itched EVERYWHERE.  I put on the head net and Deet over any exposed skin.  I hate using Deet, and I hate the head net.  But I was being eaten alive.

The hiking today was interesting, but it was also hard.  First, there was a lot of blow-down (trees and snags--dead trees--blown across the trail.)  With blow-down, you are stepping over, going around, or swinging under.  Blow-down slows you down.  Second was the rock.  Some parts of the trail are a jumbled mess of rock.  You need to be careful with every step.  Third, and much less of a problem but it exacerbated the situation, were uphill sections of trail.

This was "set up" day here.  I hiked to position myself for going to Mazama.  I am only twelve miles away.